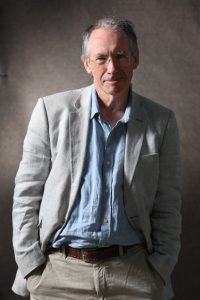 Ian McEwan CBE was featured by The Times on its list of 50 greatest British writers since 1945.  The author of 17 books, he has won the Whitbread and Booker prizes and the Somerset Maugham Award.  Four of his novels have been made into films.  His subversive and entertaining new novel Machines Like Me poses fundamental questions:  what makes us human?  Our outward deeds or our inner lives?  Could a machine understand the human heart?  Described by the Guardian as “right up there with his very best”, this is a provocative and thrilling tale which warns of the power to invent things beyond our control.

Neil Clayton began his career teaching English at Leighton Park School, then became head of English at Woolverstone Hall where Ian McEwan was among his pupils.  Having no ambition to become a headmaster or inspector he left the teaching profession and started a business as a dealer in rare books and prints. He is now retired.