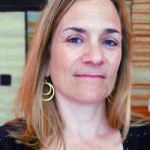 Tracy Chevalier will be appearing at the Festival on Saturday 16 November.  She is the author of seven novels, and her second novel Girl with a Pearl Earring won the Barnes and Noble Discover Award.  It has sold almost four million copies worldwide and was made into a film starring Colin Firth and Scarlett Johansson.  Her new novel The Last Runaway was published this year.  She grew up in Washington, DC and after university moved to London, where she lives with her husband and son.  She worked in publishing for several years before doing an MA in creative writing at the University of East Anglia. She has been Chair of the Society of Authors, and judge of the Jewish Quarterly Prize, the Bridport Prize, the Royal Society Science Book Prize, and the Orange Prize.

The Last Runaway is the story of Honor Bright, an English Quaker who travels to the free state of Ohio in the 1850s. Suddenly, stranded, she creates a new life.  Ohio is close enough to the Canadian border to be on the flight path of runaway slaves.  Honor is drawn to help them but in doing so threatens her own security.  This novel, her first about her native America, has been warmly welcomed and reviewed.  Chevalier, who has lived in London since 1984, attended Quaker camp as a teenager, and is still active in the religion, but qualifies: “Sometimes I go for months without going to meetings, but when I go back I feel really comfortable.  I’m not heavily into it but more and more as I get older, I appreciate the silence aspect of it. The world seems to have gotten really noisy for me.”

Yet, as a hugely successful author, she  is expected in today’s publishing world to make some noise, get attention for her novels: “There’s been a huge shift, and not just with the eBook. When The Last Runaway was published in the US there was no book tour and no face to face with any American journalists.”  Most of her publicity was by phone and Skype.  There were e-mail interviews, and she contributed to blogs. “Which is fine, but it takes some getting used to. And in the States they don’t review books the way they used to. They’re also taking literary blogs much more seriously.  I’m a bit ambivalent about it. I don’t know how someone establishes a reputation as a blogger.”  Which is why she so much enjoys connecting at events like the Lavenham Literary Festival where she can talk intimately to readers:

“People think, ‘I don’t have to go see that painting because I have a perfectly good view of it on my computer.’  ‘I don’t need to go to the cinema because I can see that film on my phone.’  Even in human interactions – ‘I don’t need to see this person because I can Facebook them.  When I was researching Burning Bright years ago, about William Blake, I got to go to the British Library and hold the notebook he had written his poems in.  Yes, there’s a facsimile online but it’s not the same as being in the room with it. Or being in the same room as Girl with a Pearl Earring and seeing it in the flesh.”

Tracy Chevalier, in the flesh, at the Lavenham Literary Festival, Saturday 16 November.